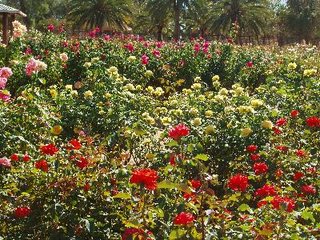 Yesterday, Thanksgiving, while waiting for the turkey to cook, we took a walk in the park near our home and were delighted to find the rose garden in full bloom. I brought the camera! This is a panorama shot, but I also got some pics of gorgeous individual blooms. It was a beautiful mild, clear, Arizona fall day. One of many things God provided yesterday to be thankful for.
On or around Thanksgiving I like to reflect upon all the many ways God has blessed me: the air I breathe, the food I eat, the ability to walk and talk and see and hear, friends, family, His word, His Spirit, my place in Christ, my pastor... It's a list I have been reviewing often of late, though, so yesterday I thought I'd reflect instead upon specific things God has done in my life this last year that I'm thankful for.
In going through last year's journal to review, I was astonished by the theme that emerged. A year and a half ago He told me through Bible class that I was going to go down. That it's the only way to grow. That we have to be willing to accept the times of humbling and losing, to lose things, to not get the promotion we wanted, to lose the promotion we'd already gotten, and still know that He is in charge.
And so it's been. As I reviewed my entries I saw the losses I was having to deal with -- the year-long death of my dog, friends, the success of my books in the marketplace, to name the most difficult. There was also very hard, continuous lessons in how to deal with people, how not to surrender control of my life over to them, something I see now I have struggled with for years.
What's amazed me is that in rereading the journal I can see His hand working, and see it clearly. When I turned in the final draft of Shadow Over Kiriath and began to think about working on Return of the Guardian-King, is when I got that first message -- "It's going to be hard, you're going to go down, you have to have suffering and loss in order to learn. There is no other way to learn the things I have for you to learn. Even Jesus learned obedience through suffering."
Two months later, when I really began to work on RotGK in earnest, I took Bear to the vet for a puncture wound in his toe and learned about the kidney disease -- he was dying. There was no cure. It would only get worse. That was very hard to take.
Last May, when I received my last royalty statement, and Arena had only sold 24 copies for the period, I was very upset, for I saw that that it was ending. The next day, after much angst and bitter complaint to my friends, the lesson that night was on suffering for blessing and I got the message again. You have to go down. You have to learn to handle undeserved suffering. Without complaint. Without self-pity or bitterness or resentment. You have to learn to handle it with thanksgiving.
We look so many times at the characteristics the Bible says we should have, the way we should be. But love, joy and peace are part of the fruit of the Spirit, not part of the fruit of us. We can't really make ourselves have peace or joy or even real love. He does it. We can't change ourselves, He does it. Through the transforming of our thoughts and minds -- which happens through learning the word combined in many cases with suffering.

"My peace, I give to you," he says to us, "not as the world gives...." How does the world give peace? By providing peaceful circumstances. Having everything go right. We meet our goals. Our work is prospered. We have supportive friends and families. 0ur needs are met. We have a solid home, a good bank account, worldly security. Then there's peace. How does the Lord give peace? Not that way. He gives it through His word and through adverse circumstances, which not only is the only way to get it, it's the only way you know you have it when you finally do.
And even then, it's all too often a choice. We can't make ourselves have peace, but we can confess our anxiety or arrogance and concentrate on the truth. If we don't know the truth, we can learn it. We concentrate on what we know: that God is sovereign and his hand rules over all, that he has wonderful plans for us, plans to bless and not to hurt, that He owns the cattle on a thousand hills, that we are already completely perfect in his sight and we aren't going to improve that perfection one iota no matter what we do, or don't do.
We can concentrate on the truth that, despite that perfection in position, we are still dust, which God knows and understands and has mercy upon; that we have an old nature which will always fight against the Spirit and the word and the new nature He put within us when we believed in Christ. Why get shocked and upset when we act like the corrupt, disgusting cockroach we are in our old nature? When it happens, God is still there. We name the sin, the Spirit regains control of our soul and brings to our remembrance the things we've learned, to change in that moment the way we have been thinking. The perspective shifts and we leave behind all those old lusts and goals and human viewpoint ideas that tormented us. And the peace is there.
It's awesome when that happens. But you can't know you have it without the trials. And it can't be developed within you apart from the trials.
For a long time I just wanted to learn the truth and make the application to avoid having difficult times. There's some validity to that approach, but this last year I've learned as never before the benefit of suffering. The need for it. And the fantastic way God has sown it into my life, along with all the truth that I need to handle it, and the encouragement He knows I also need when I fail. And fail, I do. Over and over.
In a recent lesson the pastor said that those who try hardest to make the proper applications of truth and live the Christian way of life are going to fail the most. The more you try, the more you'll fail. But that's okay. That's how it is. When you see that about yourself, there is no room for boasting. It's all God's doing. He's the strong one. I'm just dust. Graced out, made new, blessed abundantly, because of Him. Because of what He did and what His son did.
So that's what I'm especially thankful for this year: the things He has been teaching me about Himself, and about myself; the suffering He has sent to do it. The promise that it will only last for a season, but that if I endure, there is reward. 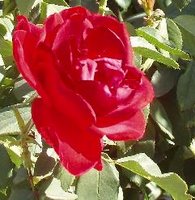