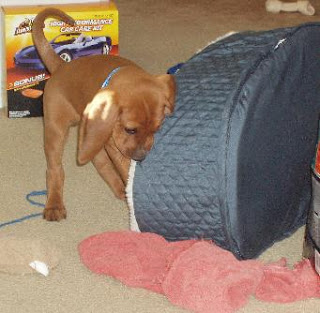 Well, Quigley is turning out to be more of a handful than we expected and seems to be turning into a huge test. I prayed God would bring us the right dog, and I believe He has. It's just that I don't know what "right dog" means in God's eyes. It seems that it's one that will drive me crazy and force me to claim promises and go to Him for help on a daily, hour by hour basis. But then, what's new with that?

I had all these thoughts of blog posts about the conference (when it was going on) and also a few reader emails I wanted to address, and now it seems that all I'm going to talk about is the dog. We have never had a puppy that goes into the manic wild phase that Quigley does. The more tired he gets, the harder and more continuously he starts biting. He's like a whirling dervish. He goes wild attacking his little dog bed (see accompanying photos). He comes over and starts biting my chair repeatedly. I tell him no and unhook his jaws from the chair and he bites bite me -- my hand, my arm, my leg, then immediately goes back to biting the chair. His teeth are sharp as I mentioned, but I really don't like the intensity of the biting, both in frequency and in force. If I tell him no, he ignores me. If I yell no, he barks back... 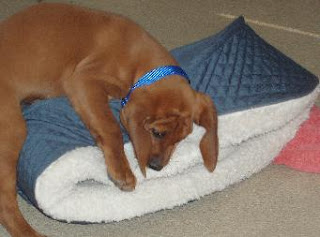 To his credit, he only does this when he's starting to get tired. It's worst in the late afternoon. He works himself into a frenzy, then finally collapses into a sound sleep. When he awakes, its sweet little Quigley again. He's so nice and gentle and calm...We've never had a pup like this, and all our methods of dealing with it are not working.

So I've been doing research... Googled "puppy manic mode" and got some hits, including a blog by SF writer Robin McKinley who has some sort of sight hounds which she calls "hellhounds" and which also apparently display this mania. Another site, on training Irish Wolfhounds (also sight hounds) had a bit more in the way of suggestions and advice, so we've decided that it's very important not to "play" with him when he gets like this and that if we can't get him to lie calmly and chew on one of his toys, then we'll either put him out in the back yard alone, or crate him.

I haven't crated him since the first day I stayed with him. That was Monday, when I waited until he was very tired and then put him into the crate. He started screaming, but fell asleep in about two minutes. About half an hour later he awoke and screamed again, so I let him out, but I think perhaps I was premature. Anyway, there are going to have to be a lot of behavior changes on my part. The information I read gave six different types of puppy personality, and my husband has concluded that Quigley falls into the "bully" category. That's a pup who takes himself much too seriously and would be the leader in a pack of dogs. Thus he expects to be the leader with us as well. They are difficult to train, but it can be done with patience. A lot of the things I've been doing have told him I'm a puppy, too. Not good.

Everyone said Bear would be difficult to train, too. And he sure wasn't easy, especially when compared with the other dogs in the training class. He wasn't as aggressive as Quigley in his puppy stage, though. But my information says that puppies do what gets them attention, hence our plan to crate him or exile him for the bad behavior.

One way I do see the Lord's hand in this: never before would I have been ready for this kind of dog, neither from my experience with dogs themselves, nor spiritually. Previously I know I would be freaking out. Now, I just keep falling back on the Lord, trusting Him to solve the problem, refusing to speculate and leap out into a future full of scary and dire what-ifs, asking Him for guidance on what to do... both generally and moment by moment specific. Seems I've had a lot of practice with this sequence, since it's exactly what I have to do with the book.

Speaking of, I need to tell my editor whether or not I expect to finish the thing by Mar 31. I have no idea. I have no schedule, because, as many know, schedules never work. I no sooner make one than I break it. Or life breaks it for me... But I can't keep not answering, so I guess I'll have to bite the bullet and make a decision. I really want to try for Mar 31...

With Quigley thus far, though, there's not been a lot of time to do much other than deal with him. I'm hoping that will change. Well, I'm sure it will, because this is God's problem and if He wants me to write the book, He'll have to provide the time for me to do that.