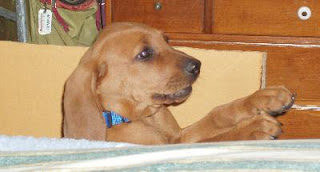 After yesterday's three half-hour segments of Quigley wailing and yowling in the crate, I was feeling like a pretty big failure as a puppy trainer. Everything I tried to do didn't turn out at all as I'd expected. I scrambled up some of the instructions (partly because I drew from several different sources and the instructions tended to contradict each other; or else they didn't exactly apply to my situation) and just made a general mess out of things. During Bible class last night he started out okay, then turned crazy, trying to chew on all manner of things in the room. So I put him in the crate. And he yowled and yowled and it was VERY difficult to concentrate.

I was certain I had made him hate the crate and would now have to begin anew with baby steps to get him to even go near it.

About nine o'clock that night, Stu called me to "come and see." Quigley had gone into the open crate all by himself and was lying inside of it, dozing. Later, when he turned into Crazy Quigley again, Stu had to put him in it for a time-out and he accepted it without a peep. 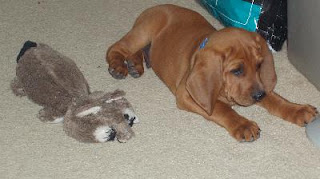 Today I've put him in the crate a number of times and the longest he's protested is five minutes. Other times he didn't protest at all, and several times he walked into it all by himself. I just closed the door after he fell asleep. When he woke up he made just enough little noises to let me know he was awake, whereupon I let him out.

So today, he's been a lot of fun. He's sooo cute. He knows his name and we've been playing hide and seek. The biting is way down -- I tell him no and offer acceptable alternatives when he tries -- and the other things, like attacking the couch as a way of getting attention... or maybe just a thing he does when he's super-tired and has no idea why he's doing it... are not nearly so manic. Progress has definitely been made! Hallelujah.

Pictures
Top: Quigley in the box he sleeps in beside our bed
Bottom: the coonhound with his raccoon (eyeless, of course)
Posted by Karen Hancock at 9:49 PM