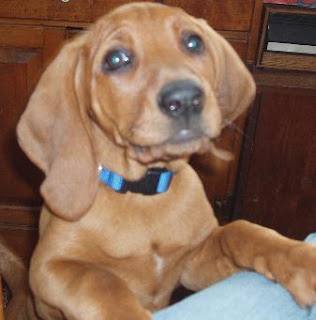 This morning I asked the Lord for a respite from my 16 hour focusing on the dog days. He answered. Quigley was soooo good today! He was like a different dog. I was concerned he might be ill, but he's eating and playing well, so I think not.

He's been really good about not biting, and stopping when I say no. He jumps beside me when I walk around the back yard, rather than on me. We just had a lot of fun today. One of the things I really enjoy is when I sit on the floor and he comes running over to get in my lap, or just hang over my leg and chew on whatever I give him to chew on. He seems to settle and I love to pet him. He's so soft and warm and puppy-ish.

My camera still labors to get good shots of him. In all three of these I've posted today, he's moving. In one, he was so cute lying there. Then I clicked the shutter and he started to bound up -- so his ear is flopping out in the exuberance of his movement! 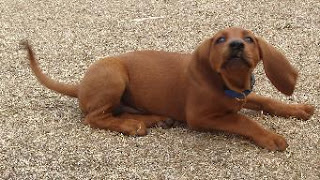 Anyway, I'm not worrying about how he turns out, something that used to be a big concern for me. I'm not worrying about whether I do the right thing or not. God will show me what to do, and take up the slack for my bungling. I'm not even worrying about whether he eats something bad in the back yard, which is a fear this latest development has stirred. Helped along by the vet who said we should take all his blankets and stuffed toys away and ... and I don't know what. Lock him in the crate 24/7 until he stops trying to eat everything in his periphery? Phooey.

He's a dog. He's a hound. They eat weird things. God will have to take care of him, because I have a book to write, and can't be chasing the dog all over the yard trying to pry every little thing out of his mouth.

And today, he did a lot less of it. Today he seemed to understand that I don't want him to jump on the laundry basket and tip it over, spilling all the clothes onto the ground. And though he was tempted, he didn't do it. Today I left him for 20 minutes in his crate and went to the store. He was fine. I just can't get over how nice today was.

I even got a lot of work done on Black Box. I finished reworking the first half of ch 12 and started in on ch 14 -- did 6 pages. So I'm happy with that, too.

Oh, and I got an email about a blog post called "17 Ways to Stop Being a Perfectionist and Get More Done" (good timing there). I thought it was a good article. Most of it I've heard/read before, but it never hurts to be reminded, because it's a habit that is all too easily fallen back into. You can find that here.

And here's my last pic of Quigley, running toward me in response to my "Come" command. (He's also learned to "sit.") 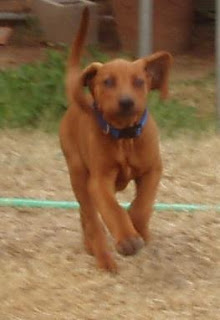