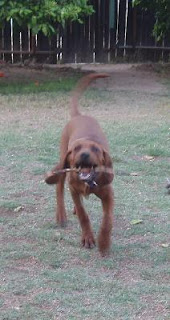 We went to the vet Tuesday for our final, prepaid check up and stitch removal. And that was exactly what happened. The second stitch was removed, the eye was pronounced healed, and though there is a bit of a scar, Dr. Merideth was confident that with time it would thin out and be no problem at all.

Quigley had destroyed his cone Tuesday morning before we left and I had to put the other, smaller one on. I knew there was a reason God gave us two of them. But after the final check, no more cone. Hooray! Hallelujah! Wonderful.

Here's a picture of him without his cone, playing with a stick. I should try to do a video, because he is so funny with the stick. He throws it around and prances about the yard with it in his mouth. If I use it to make the wind chimes sound, then he's REALLY happy to get it.

Since I can now put him in the backyard again, that's what I did. I managed to get about 8 pages written of ch 22. And I got my deadline extended again, to June 1, though I'm hoping to be done before them. But then, I've said that before.