Spring in the Desert 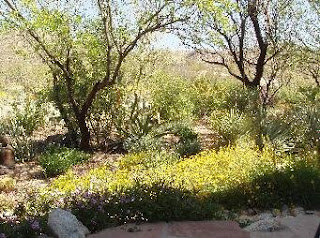 It's spring in the desert. The paper flowers, brittlebush and desert marigolds are blooming. The bees are buzzing. The snakes are out. The birds are nesting and singing. The wind is blowing with temps in the 70s and 80s... and clear blue skies with a bit of cloud for the sunset.

Last Tuesday I took Quigley to the vet with high hopes the stitches would come out of his eye and the cone collar would come off. Alas, though the doctor looked in his eye and pronounced his healing to be much further along than expected -- "It looks GREAT!" -- and did take the cone off, he only took out one of the two stitches that were holding his eyelids together as a bandage. If Quig started to scratch it, then we had to put the cone back on. We could bring him out into the yard, but only if the wind wasn't blowing. (Several people have noted that our windy days started about when this whole thing with Quigley started -- and haven't stopped yet). And if we had him in the yard, someone had to stay with him to be sure that he "didn't get into any trouble." Whatever that means.

But at least he didn't have to wear the cone any more! I took him to a nearby park after our appointment and we walked around. Then I brought him home, put his sleeping crate back together, put the furniture back the way it was before the cone arrived, and called my husband. Two minutes into the conversation I had to hang up because Quigley started to scratch his eye. So I put the cone back on, disassembled the crate, put the furniture back into its cone configuration and sighed a deep sigh. It's 85% healed the doctor said on Tuesday and we don't want to lose that...

So we have continued as before, though with a few modifications. We don't have so many medications to give, and those we do are much reduced. I've stopped being so paranoid about taking him outside. We don't stay a long time but windy or not, he needs to be outside a little. I stopped using the leash when I took him outside into the back yard. I started barricading him in the dining room and removing myself from his presence when I felt the need for separation. I realized that I cannot keep a speck out of his eye, nor do what the doctor said whe should do. It's impossible with the dog that we have. I still can't really leave him alone, so that means I can't go anywhere during the week. And we've had to take lots and lots of walks. To the point that yesterday I got a cramp in my thigh and so have to cut back on the walks!

I also put the dog, his recovery, my actions, and the book into the Lord's hands and with varying degrees of success, left them there. And this last week, somehow through it all I managed to get chapters 19 and 20 written, and today I worked through ch 18. I have two separate storylines going and tomorrow I will continue the one from 18 into chapter 21. I've been asking the Lord if I should email my editor and ask for more time, but He's not given me a definitive answer on that, and since I'm not sure how many more chapters I have... it could be ten, which might actually get done in the time I have left. Or it could be more, which might not, I'll give it a few more days and see how things develop.

Of course, if some new crisis arises then that would change everything but for now... we'll see. We have only one more day of the cone and see the vet again on Tuesday. Maybe this time my hopes will be realized!