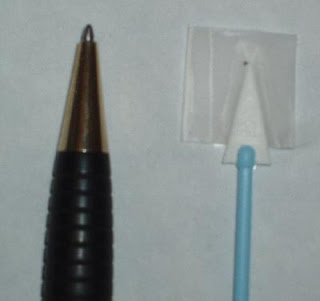 Here is a picture of the speck that was in Quigley's eye. See that tiny black dot at the end of the white arrowhead on the right? That's it. The ballpoint pen (on the left) is there for scale.

Today, Friday, I did about half an hour of very lame editing on some of the material I had in ch 19, Bible class, and almost nothing else. I was pretty much a dog nurse for the entire day. Or maybe the dog nanny.

He's not supposed to get all exercised and rambunctious, but all his chews that we use to calm him down, he can't chew without help because of the Elizabethan collar. So I have to sit with him and hold the chew. Then he can't go outside except to "eliminate". Since we are still working on communication about that issue, I have to take him out a lot, on the leash (which he keeps trying to bite now). Can't just put him out in the yard because we don't want to get anything into the healing eye. Dust, bits of grass, leaves, weeds. Our yard is very interesting for a dog, but not a very good hospital ward.

He's also supposed to have ointment put in his eye every 4 hours. Stu did the 6am one, but my attempt at 11am was a complete disaster. I tried three times, wrestling and fighting to restrain him til I was panting with the effort. And since I couldn't restrain him with one hand and put the ointment in with the other, especially with the collar in the way... it was a disaster, as I said. I know I got the outside of the eye well-covered; unfortunately the ointment was to go in the eye, not outside. Worse, after that, now he's all weird with me.

Well, everything is weird. Our entire routine, all his usual things, are gone. He can't sleep in his crate because of the collar, which is too big. So last night Stu sort of stayed up/slept with him in the living room. He kept trying to take the collar off, insisted on sleeping with Stu on the sofa... and I don't know what else.

It's like all our efforts at training him are also going down the drain.

In between the bathroom trips, holding the chews, and the war over the ointment I tried to figure out other things to distract him from getting all excited about pulling his e-collar off, or fighting with the sleeping bag in his disassembled crate... Like filling the kong toy with treats so he could work them out of it. And take him on short walks in the street, which they said we could do, as long as it wasn't windy.

The eye doctor did say we might have to use sedatives for him, if he's too rambunctious. In his defense, he did sleep for three and a half hours straight this afternoon. And then another half hour a little while after that. And I think he's lying quietly out in the living room right now, but earlier there was nothing quiet about him.

And at the end of the day, we're trying to decide: is his eye more swollen than it was or isn't it?

PS. We see the doctor on Tuesday morning when hopefully he will take out the stitches and say we can quit with the e-collar.
Posted by Karen Hancock at 8:11 PM