Last week, right as I was finishing up the galleys, the neighbor came over to ask if we had a bunch of dead bees in the yard. No, we had no dead bees that I knew of. I went out and looked, but no dead bees. She, however, had a bunch of them on the ground near the fence that separates our properties. We looked at the bees, most of them dead, some dying, and speculated what might have happened. Maybe they'd gotten into poison...

Afterward I went in and called my husband at work. He called a friend who knew about bees, and from him learned that the temperature the night before -- in the low 40s as I recall -- was cold enough to kill bees when they are swarming. No doubt there was a swarm, and when they stopped for the night, balling up in a tree somewhere, the outside layer of bees had perished in the cold and fallen to the ground.

Well, that was interesting. If it was so, then maybe the swarm was still there, because at the time it was still pretty cold. So I went out for another look. There were only a few bees buzzing around, but nothing obvious... Wait. What was that dark blob way up there on one of the pine tree's branches? I peered at it, walked around trying to find a better vantage, thinking it looked an awful lot like wood or some sort of deformed growth of pine cones. Could it be the swarm? It looked completely solid. And nothing was moving. Suddenly I thought of the camera. I could use the telephoto to get a better look at it. So I did. And it was the swarm: 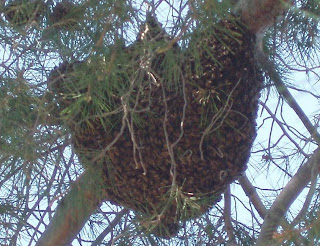 At left is the mass of bees. It was about the size of a basketball. It stayed just like this until about 3 pm when the bees began to stir. About that point the neighbor freaked because this was right above her back patio. Even though I told her I didn't think the bees would hurt anyone (they don't sting when they are swarming, only when they have a hive to guard) and that we could just wait for them to move on she wasn't interested in waiting. She called some bee removal people, who came a few hours later and dispatched them.

I thought it was weird of me to be sad that the bees died. But...obviously there were many bees around or they wouldn't be swarming and the likelihood was great that having been stressed by the cold they would look for a permanent home very close to where they'd swarmed. Like in our yard. All our bees in Arizona are Africanized now, and so you don't want them setting up house on your property, especially not in a place close to the neighbor's door or patio, so I couldn't feel that badly about their demise. As I said that was about a week ago.

Then, late yesterday, the neighbor called to tell me the bees were back. So I went out again, and this time the swarm was making its way into one of the tires in a stack of three we have out in a side yard. A carpet of bees covered portions of the tread of the tire and was moving slowly upward through the crack between where two tires were stacked. Others buzzed wildly about the area. Exactly what we were told to beware of...

Well, my husband took care of them after dark. He said even when he took the tire away, they didn't fly much, didn't try to sting, just bunched together. He thinks they might have been remnants of the earlier swarm. Could be, since there weren't nearly as many.