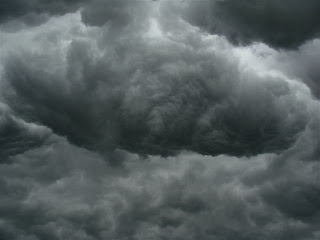 On the second day God made the atmosphere ("made" is the verb asah, which means to fashion, to make -- out of something that's already there) and divided the waters around it, the water below and the water vapor (clouds) above.

On the third day He told the the waters to gather into one place and the dry land appear ("one place" gives rise to the speculation that the land might have been one mass, the original single continent some have speculated once existed, which could have subsequently been split apart during the flood of Noah. Either way, the Bible doesn't say).

Also on the third day God said, "Let the earth sprout vegetation... plants sprouting from the earth, producing seed after their own kind." After their own kind clearly indicates that they were not evolving into different forms, but each seed producing a new plant just like the old one. "And it was so" means instantaneously. So the plants were adults. Did they have an appearance of age as some claim? Well, they could. One of the oft used methods of dating archaeological finds is through tree rings, which are larger or smaller, lighter or darker depending on the conditions under which they grew each year. In really good conditions the rings are fat; in poorer conditions, they are thin. God could have made the trees with multiple rings, or just one large ring, to which more rings would be added in subsequent years. The Bible doesn't say. Only that they are mature plants ready to reproduce after their own kind.

On the fourth day, He made the sun and the moon as light bearers and also the stars. Previous to this time, God Himself furnished the light that shone upon the earth. The Hebrew word for "light" in verse 14 is maor, which is different from the word used in verse 3, or. Or refers to light itself, whereas maor refers to lightbearers -- sun, moon, stars, planets, etc.. Since these had already been created instantly in verse 1, but had been darkened as a result of the angelic rebellion and subsequent judgment of the fallen angels, the reference in vs 14 is to the restoration of their lights.

It is worth noting that even though many of them were millions of light years away, God made their light instantly visible on the earth, which messes up the evolutionists' speculation that since Andromeda is two million lights years from earth, the universe must be at least that old. (Although how they arrive at that age for something that far away is also something based on a number of assumptions we really can't verify)

On the fifth day, He created the animals, again, all of them after their kind. No evolving from a fish into a salamander into a lizard... and the verb here is bara again, not that He created them out of nothing as with the universe in vs 1, but to emphasize this was God's creative power at work and negating the idea that the earth somehow made its own animals through the evolutionary process from the plants already on its surface.

On the sixth day, God made (asah) man -- body, personality -- and created (bara) him -- soul. He did this only after He'd provided a home for him, complete in every detail, an action that clearly manifests God's character and love for those He creates.

Finally, on the seventh day, He rested. There is such spiritual significance here... God did all the work. God provided everything. God put the man in the place He had prepared for him. He did everything needful in the six days and nothing needed to change into something else, nothing needed to be improved or perfected. It was all perfect and complete. Thus He rested, not because He was tired, but because He had provided everything man would need and He wanted us to know that. Wanted us to remember that. This whole story sets the precedent for our lives: God does the work. We receive the blessing.

If that was God's policy when man and woman were perfect, how much more so now when we are not? After all, He created us knowing we would fall, even intending it, from the standpoint that He meant to use it to bring about something better than simple perfection. He has provided salvation through His son, and for those who believe in Him He has provided everything we need to live with Him forever. A fact He wants us to rest in every single day.

Tomorrow: Some things we're just not given to know.

~~~ Photo is from my friend Debbie from Kansas of a cloud formation called a gust front which she photographed near her home. I think it looks very "primordial"!
Posted by Karen Hancock at 6:49 PM