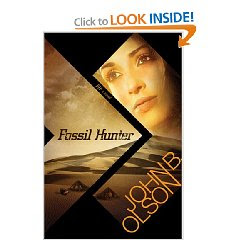 It's been a year since I've read a book. Actually more than a year if you're talking about a book I've actually been able to finish. Last June, I started reading Fossil Hunter by John B. Olson, a book which was released a year ago April. Before I could finish it, though, I got the editor's response on The Enclave and had to stop reading to focus on the rewrite... which, as anyone who reads this blog knows, took me a LOT longer than I'd anticipated.

But, having finished that last week, one of the first things I did was pick up Fossil Hunter again. It had been so long, I had to start over, which was fine since I'd pretty much forgotten what I'd read previously. This time I was able to sit down and much read it more or less straight through. What a pleasure to be able to do that! What a difference it makes in the coherence of a story!

From the back cover :

In the desolate Iraqi desert, a lone shepherd stumbles across a whale fossil. Initial analysis indicates that it could be a new species -- a discovery that might shed light on the evolution debate.

Paleontologist Dr. Katie James is asked to lead an expedition to recover the rest of the fossil before her archrival, Nick Murad, can find it first.

But while she's there, Katie also uncovers the unexpected -- a human fossil so controversial she's forced to collaborate with Nick to analyze the find before it can be destroyed by a fundamentalist faction of the Iraqi government. Their initial results fly in the face of current scientific theory, and it seems the whole world turns against them,including those they thought they could trust.

Then the fossil disappears, sending Nick and Katie on a chase that could cost them their reputations, their careers -- even their lives.

I enjoyed it! It was an easy read, and I think I like stories about groveling around in the desert. Dirt, heat, thirst... fossils... And of course the debate regarding evolution versus intelligent design versus creationism has long been a subject of high interest for me.

And while I don't agree with the evolutionary stance of his protagonist ("directed evolution" is the term, I think) the various discussions he presented were quite thought provoking. So much so that I've decided to do a few posts out of the wealth of thoughts I wrote down. (Okay, and because The Enclave also deals with this debate, albeit peripherally.) Tomorrow I'll post about my background with regard to evolution, and next week I'll set down some of the observations, agreements and objections I had while reading. At least... that's the plan...