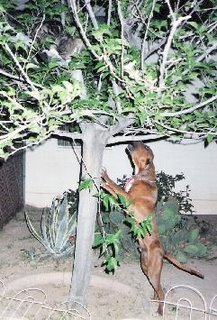 The one thing Bear has never been terribly good at is anything to do with the coonhound aspect of his breed. It probably doesn't help that we don't have a lot of raccoons in Arizona -- you need a lot of water to have a lot of raccoons I expect. He loves to go out running around in the night, but I don't believe he's ever treed a raccoon. In fact the first thing he ever treed was the neighbor's cat...

(Yes, there is a cat in the photo above: he's that gray blog up in the tree on the left.)

Treeing the neighbor's cat however, is not good for neigborly relations so, like many people, we joined the regional coonhound association which holds Trailing Dog Trials several times a year (none of which involve cats). The best way to train a tracking dog, they say, is to put him with a pack of experienced dogs. In fact at the trials it is pretty funny to watch the young dogs on the scent-drag event. The experienced hounds go racing off on scent, leaving the youngsters behind in a mass of confusion, barking at each other, running here and there, noses to the ground, searching for...well, they aren't sure what they're searching for and what difference it makes anyway, because EVERYTHING smells good! And it's so exciting!

Coonhound events include the hundred yard dash, the treeing bark competition, following a scent-dragged trail, and a swimming race. Bear, remember, is the alert to all the distractions dog, so the primary thing he does at coonhound events is bark at all the other dogs as they just bark. When coonhounds get excited they bark (this is painful when you are on your way to the park in the car) so being at one of these events is an incredibly noisy affair. They're bred to do that, so that they'll bay when they're on the trail and the hunters behind them can follow along. (There is no hunting at the trials, though.)

The first event I ever participated in was the hundred yard dash. I had Bear on the starting line and my hubby was at the finish hoping his presence would draw Bear on even faster. He is supposed to be really fast -- his daddy was a purple ribbon champion at it. So we're standing there, waiting to unleash our dogs, all these hounds baying their hearts out. Bear is going bananas, figiting all around, backward, forward and --- Oh! What's this? I have a collar on the end of my leash and no dog! Somehow he backed out of his collar. We both realized it at the same moment and he was off before I could catch him... moments before the starting shot sounded. Which means he was disqualified, even though he ran straight to the tree and beat all the other dogs. Alas...

Have a great weekend
Karen
Posted by Karen Hancock at 12:29 PM