Water in the Desert 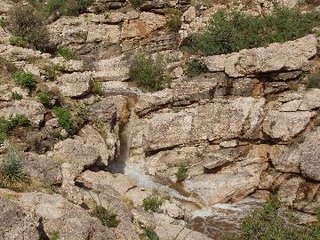 We've been getting lots of rain in Southern Arizona -- perhaps you've heard. Bridges are closed, the dry washes are running bank to bank and even overflowing some of the bridges. We're in the middle of town, so we don't have to worry, but on Sunday we went up the road to Mt. Lemmon. That's an 8000 ft peak about an hour from the heart of town, sporting spruce, aspen, ponderosa pine and a ski run. We didn't go that far, only to some of the drainages at the 4000 foot level, where we hoped to see the water flowing -- and were not disappointed.

So here are two pictures of water in the desert. Normally these places have no water at all, or at most a small trickle. The first one, above, is looking down into a steep walled basin. The water's not easy to see since, being mostly runoff, it's got a lot of sediment in it, which makes it the same color as the rocks. But you should be able to see the brown and white pool in the lower right hand corner with the white stream rushing into it from the left. 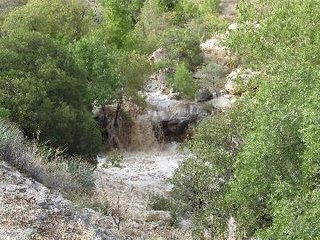 The next one was taken alongside the road where the Forest Service fee station is located. The water's easier to see here, still brown, but the trees and the white foam help to bring it out.
Mt Lemmon got six inches in two days and the rest of us close to three inches, with some locations getting more. I think we're almost at our normal rain totals for the year.

People are getting stranded, driving into flooded dips despite numerous warnings. Arizona now has a "Stupid Motorist Law" for those who ignore the posted warnings and try to drive through the ditches anyway. If they get stuck and have to be rescued, they have to pay all or most of the cost of their rescue. If it involves helicopters and such, that's going to be alot.

Looks like our storms are subsiding for now. They were not the usual afternoon monsoonal pattern that we get, but strange storms, moving slowly southward across the state and reaching us during the night. Both Saturday and Sunday nights I awakened to let Bear out, and found lighting flashing, thunder crashing and rain falling. Quite exciting! But not for the people who have to travel around in it.

Karen
Posted by Karen Hancock at 6:45 AM