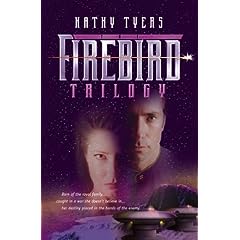 Today marks the first day of the August Science Fiction and Fantasy Blog Tour. This month the tour is highlighting the work of author Kathy Tyers, with an emphasis on her Firebird Trilogy. Published in 1999 by Bethany House, Firebird was the first in what has turned out to be a new wave of Christian SF. Beth Goddard is coordinating the tour from her blog, Writing with Fire.

Kathy is well known outside of Christian circles as the best-selling author of the Star Wars novels, Truce at Bakura and Balance Point. She also has the distinction of having published three of her novels with two different publishing houses. The original Firebird and its sequel, Fusion Fire, were first published by Bantam Books. Though Kathy had hoped Bantam would take the final in that series, Crown of Fire, the evil marketing gnomes (okay, maybe they weren't technically "evil"... ) intervened and she was instructed to write something entirely new. So she penned the delightful Crystal Witness, followed by the Nebula Award nominated Shivering World, Truce at Bakura, and finally her last book with Bantam, One Mind's Eye.

There followed a period of spiritual and artistic redirection, from which she emerged with the Bethany House contract to reintroduce Firebird and Fusion Fire, this time bringing into greater relief the already existing faith elements in those books. Even better, Bethany House wanted her to finish Crown of Fire, which had been so frustratingly left hanging. What a blessing to see that book finally in print! Not only for her but for the rest of us as well -- a real-life example of how the Lord can breathe new life into something we thought was entirely dead and without hope of resuscitation. Today, all three volumes remain in print as a three in one volume, The Firebird Trilogy.

In addition, Bethany has republished Shivering World, also with increased focus on and development of the faith elements. Kathy's also written a number of Star Wars short stories for inclusion in anthologies and a travel guide to the Rockies, where she's lived until recently. Her most recent book Grace Like a River, a biography of her friend, Classical guitarist Christopher Parkening, just released from Tyndale House this summer. For a complete listing of all her books, check her website, www.kathytyers.com .

Have fun, and if you've not yet tried any of Kathy's work, I recommend it highly.

Karen
Posted by Karen Hancock at 6:40 AM