I am what I am

"The habit of compulsive, premature editing doesn't just make writing hard. It also makes writing dead. Your voice is damped out by all the interruptions, changes and hesitations between the consciousness and the page. In your natural way of producing words there is a sound, a texture, a rhythm -- a voice -- which is the main source of power in your writing. I don't know how it works, but this voice is the force that will make a reader listen to you, the energy that drives the meanings through his thick skull. Maybe you don't like your voice; maybe people have made fun of it. But it's the only voice you've got. It's your only source of power. You better get back into it, no matter what you think of it. If you keep writing in it, it may change into something you like better. But if you abandon it, you'll likely never have a voice and never be heard.

Freewritings are vaccuums. Gradually you will begin to carry over into your regular writing some of the voice, force and connectedness that creep into those vacuums."

For some time God has been dealing with me in regard to issues of self-esteem. We cannot love our neighbor until we love ourselves. But what it means to love self is something that I'm only gradually coming to understand. It is a love that is independent of how others see us or treat us, and also independent of our performance. 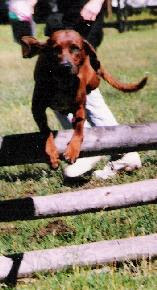 One image that I picked up along the way is that of my dog. When he was out in the park, running, sniffing, peeing... just glorying in being alive and wholly unconcerned with what others thought of him. He was jubilantly being himself.

We are too often concerned with how others see us (and others too often make a point of informing us). Instead of just being who we are and doing what we do, we worry that there will be those who will not like it. But God's word says I am what I am by His grace. My voice, my personality, my likes and dislikes, my opinions... they are mine, and they are such by His grace. They are, at core, what He's made me to be.

Yes, sin distorts who we are, but so does the cosmic system. So does the bondage that others force upon us. It's weird how on one hand we all want to be special. But on the other, special means different, and different is often very hard, especially if we're with others who don't like "different." How many people cave with regard to speech, dress, activities, likes and dislikes, hobbies, etc, because they just don't want to be different? Being different often means being alone. Having opinions that are not widely embraced, means having them alone.

I see I'm getting off track from what I originally meant to say. Which was that we must accept ourselves for who we are as God made us to be -- in the way we speak or act or talk, in how we look, in how we dress, in what we like to read or write or do -- regardless of others' opinion of that. To be able to respect others and love them and still hold on to yourself for who you are, still be comfortable in who you are, is part of maturity -- both natural and spiritual. Maybe especially spiritual.

One time my pastor had just given his opinion on some matter I no longer recall, then said, "And please don't come up to me after service and give me your opinion. I value my opinion over yours." It shocked me because I think almost all my life I've lived in bondage to others' opinions. They were regarded practically as sacrosanct. One was not allowed to ignore them! And certainly you couldn't value your own opinion more than that of others! But when he said that, and all those thoughts poured into my head, for the first time I questioned them. Why can't I value mine more than others? In fact, isn't it just logical and even necessary that I do? I'm not going to be held accountable at the judgment seat before my Lord for anyone's opinion but my own...