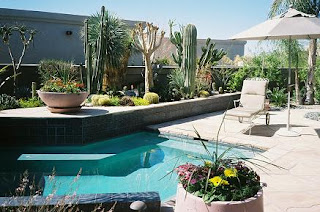 Every year about this time, my mother and I spend a Saturday attending the Tucson Botanical Gardens Home Garden Tour. There are usually from 7 to 8 homes sprinkled about the city that have been selected as part of the self-guiding tour, and they span the gamut from low cost to high, whimsical to contemporary, low-water use to lush and tropical. It's always a fun time, seeing all the different ways people have designed their gardens, both for beauty and for food. 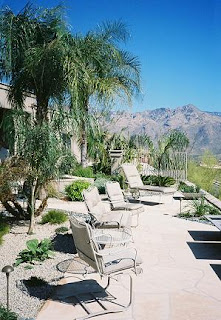 The picture above is from the first house we visited which boasted an incredible cactus garden on a patio/veranda overlooking spectacular views of the city and the mountains. You can get a partial sense of that view from the picture at right.

This year's tour was one of the best we've been on. In fact, because of a usage conflict I had to bring a regular film camera and ran out of film in the front yard of the third house. Unfortunately that was also the one whose owners had transformed the back yard swimming pool and spa into a koi pond.

I had no idea how mesmerized I would be with those fish. They were huge! At least two feet long -- about 17 of them, many of them award winning fish -- and obviously quite weighty. They were drawn to people standing at the pool's edge, weaving back and forth through the water in an intricate dance with a powerful, even regal sort of grace. Mostly they were red-orange and white but there was also among them a golden one. I've read enough about the magical and rare golden carp that it had to have been added on purpose. After I'd stood there awhile, the owner came up and offered me a couple of handfuls of food to feed them with. Boy was that a kick, watching them rise out of the water with gaping, toothless mouths to shovel up food and water both. 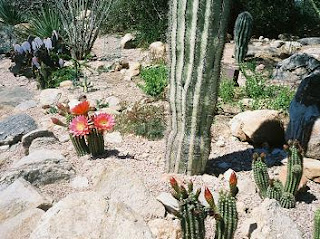 I got no pictures of the koi, but I did get at least get a couple of the hedgehog type cactus (echinocereus) blooming near their front driveway. (The huge pink and yellow flowers in the shot at left) 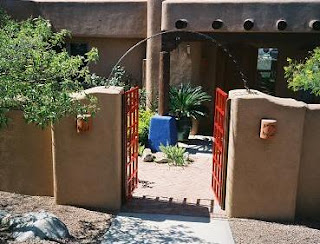 At a different house, I got a big kick out of this entryway with a bright red gate and bright blue post foundations (there has to be a better name for those -- pilons?) Inside is a quiet courtyard with chairs, fountain and flowers. Oh, and the front door, too.


The weather was beautiful (as must be obvious from these pictures), and we had a fine time. You'll be seeing more shots from the various gardens from time to time in this blog. For now I'll end with this shot of the mountains to the north of Tucson, the Santa Catalina's (where a 40 minute drive takes you from saguaros and paloverde trees to aspen and spruce). Note, in particular the cloudless blue sky!