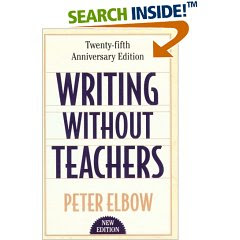 Writing Without Teachers
by Peter Elbow

I love this book. Its writer has related more to my system of writing and creative process than any I've yet encountered. The first time I read the book, I was crying "Yes! That's just how it is!" on almost every page. I had earlier read his Writing with Power and it was there I first encountered the nonstop (he calls it "freewriting") but it was in reading Writing without Teachers that I really began to accept the chaotic nature of my own writing process -- and to see it as something valuable.

Here's a quote I read today about nonstopping (freewriting) that I wanted to share:

(Note: Freewriting is where you set a timer for ten or so minutes and just write -- anything -- until the timer goes off. It is writing that is not intended to be read, evaluated or responded to. The only rule is that you cannot stop writing.)

"Freewriting may seem crazy but actually it makes simple sense. Think of the difference between speaking and writing. Writing has the advantage of permitting more editing. But that's its downfall too. Almost everybody interposes a massive and complicated series of editings between the time words start to be born into consciousness and when they finally come off the end of the pencil or typewriter onto the page. This is partly because schooling makes us obsessed with the "mistakes" we make in writing. Many people are constantly thinking about spelling and grammar as they try to write. I am always thinking about awkwardness, wordiness, and the general mushiness of my natural verbal product as I try to write down words."

[[I am thinking about the clunkiness, as well -- of the words, the dialog and often of the characters' actions and the plot...]]

"But it's not just "mistakes" or "bad writing" we edit as we write. We also edit unacceptable thoughts and feelings, as we do in speaking. In writing there is more time to do it so the editing is heavier: when speaking there's someone right there waiting for a reply and he'll get bored or think we're crazy if we don't come out with something. Most of the time in speaking, we settle for the catch-as-catch-can way in which the words tumble out. In writing, however, there's a chance to try to get them right. But the opportunity to get them right is a terrible burden: you can work for two hours trying to get a paragraph "right" and discover it's not right at all. And then give up.

"Editing, in itself, is not the problem. Editing is usually necessary if we want to end up with something satisfactory. The problem is that editing goes on at the same time as producing. The editor is, as it were, constantly looking over the shoulder of the producer and constantly fiddling with what he's doing while he's in the middle of trying to do it. No wonder the producer gets nervous, jumpy, inhibited, and finally can't be coherent. It's an unnecessary burden to try to think of words and also worry at the same time whether they're the right words."

It also works in relationships, where the person waiting for that response provokes your internal editor into overdrive and even in speech you become nervous, jumpy, inhibited and incoherent...