The Lady in the Water 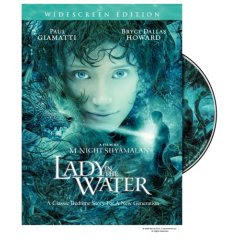 Last weekend, on Saturday night, we watched The Lady in the Water. I tend to like M. Night Shyamalan's movies and this was no exception, though I thought at the beginning I might not. It starts with a goofy little story about sea people trying to reach out to humans to help them, if only the humans would listen. There is fear that the humans have perhaps lost the ability to hear...

The term "sea people" makes me think of demons, incarcerated under the sea, and I didn't the like the idea of them reaching out to help us, nor the little pictographs they used to illustrate the story. Humph. I don't know about this...

Then the first person you see is Paul Giamatti, who I really liked in The Illusionist, so I stayed with it. It is a bizarre little movie, about the manager of an apartment complex who rescues a woman from the complex's pool only to discover she is a character in a Chinese bedtime story (one of the aforementioned sea people) trying to complete the mission she was sent on and go home. Only trouble is, she has very little information as to the specifics of that mission, and there are nasty creatures trying to stop her from fulfilling it.

There were times when I noticed that it was moving a bit slowly, as I did in The Village, but I didn't particularly mind because I was intrigued. It has suspense, weirdness, off the wall, even whimsical moments, and when it was all over I found myself rather pleased. My first notion was that it was a wonderful metaphor for the body of Christ. For us trying to figure out what we're to do, where we fit, and who we are. Concepts of "not many mighty are called" came to mind.

The next morning I woke up and realized it's also an extended metaphor for writing a story. Complete with a critic. You'd think I'd have seen that part first since the girl's name is Story. But...I didn't. Once the doors opened, though, all kinds of things fell into place and I loved it. I think I might have to own it and see it again.