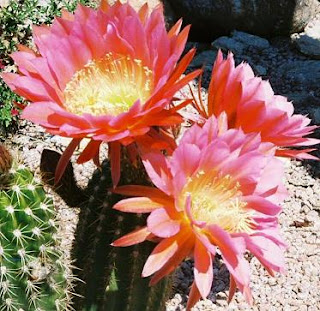 It's spring in the desert: the blue, blue sky overhead, the purple mountains looming at the end of roads lined by brilliant yellow paloverde... The cactus are all blooming, as are my amaryllis -- a white and a red. A pair of flycatchers are making a nest in the paloverde across the street, and yesterday I found five lemons on my poor lemon tree -- which was hit very hard by the snow this winter. Five lemons! Hooray.

The tour is over. Return of the Guardian King has been officially launched (as far as I'm concerned, anyway), and I want to say thanks again to all who participated. The praise was by turns extravagant, gratifying, embarrassing, hard to believe, heart warming, giggle-producing and sobering.

The complaints were... difficult. They're always difficult, and bring out my very human tendancy to put way more emphasis on the negative than on the positive. I could get twenty reader letters praising my work to the skies, but the one that tells me all the things the reader thought I'd done wrong -- that's the one I take to heart. For awhile anyway. It's weird how that is. We do the same thing in contemplating the future. A weird medical test comes back and we fear the worst instead of focusing on the best. We submit our book to an editor and it seems much more likely the editor will NOT like it, than it does that he (or she) will.

Or maybe some people are just like that -- those with a tendancy toward pessimism. The optimists are on the other side, always, and, sometimes even delusionally, assuming the best.

Delusions aside, I have to say that optimism in general is much more suitable for members of God's Royal Family than pessimism. We all know how our story ends, after all -- in heaven with our Loving Father forever. If God is for us, if He loves us with a perfect, intimate, never faltering love, how can we be pessimistic? We can't, and I have gotten away from the pessimism as I've grown. But taking negative comments too seriously is still a weakness I cave in to far too often.

On the other hand, the complaints do make you think. Do I agree with what's been said? Is this perceived fault actually a fault? Or just a preference? Or perhaps -- and I'm seeing this more and more -- the result of a reader bringing a different frame of reference to the work than I did. Change the frame of reference, change the template with which you view the events of the story and perhaps the fault will disappear. It might even become a strength. I have some things to say about that with respect to one of Dean Koontz's books as well as my own... But not tonight.

The vast majority of tour posts, though, were not complaints but fun, interesting, creative, instructive, enlightening and funny. I am so grateful that people took time out of their busy days to read my book(s) and then blog about them. And I learned many things from it all. I learned to sit back, relax and watch things unfold rather than jump to hasty conclusions. I learned that some readers came to my books in the first volume, struggled with elements they saw as flaws and faults and later, when their perception changed, looked at it all differently. I learned that people prefer to comment on thorns than rosebuds
Posted by Karen Hancock at 9:32 PM