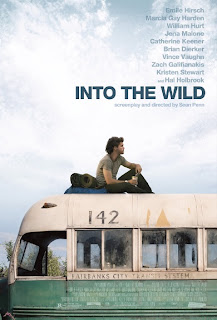 Last Friday we rented the movie, Into the Wild, a Sean Penn production (that's almost an automatic strike against it in my book) based on the 1996 book of the same name by Jon Krakauer based on the life and unfortunate death of Chris McCandless at the age of 24. Some people, including Penn, regard McCandless as a hero, a pilgrim and a seeker of great... um... well.... I'm not sure. But you can go to some websites and read the burblings and ravings of people who view him (as portrayed in the movie) as an angel, a courageous and daring young man, an amazing individual who, had he lived, would have changed our world... Like this one HERE.

Well, I don't know too much about the real Chris McCandless, but the one as portrayed in the film was a completely self-absorbed twit who thought way more highly of himself than he ought to have and died because of it. But not before torturing his parents and his beloved sister with his wrong-headed... seeking. Or, to put it a bit more gently, he was a poor lost soul, with a hole in his heart only God could fill, but since he wasn't interested in God filling it, he could only wander about trying to fill it with other things.

The story begins with young McCandless entering the Alaskan wilderness in early spring, afoot, with a backpack, sleeping bag, and plastic water bottle tied to the outside. The man who drives him to his "launch site" hands him a pair of rubber boots as he is about to set off, telling him he'll need a good sturdy pair of rubber boots to keep his feet dry. This is a Clue.

Then the movie switches to the past where we see him graduating from college, apparently with flying colors, but with a real grudge/resentment problem toward his parents. They are horrible in his view and the cause of all his discontent, which is considerable, despite the fact he has everything -- a college degree, money, a family who actually cares about him, health, youth, good looks, etc. Of course, it's true none of those things are a true source of happiness, and his parents, like all parents, are people with old sin natures who've made their share of mistakes, but it was the utter ingratitude and judgmental spirit he had that I didn't like.

Once graduated, he endured a painful graduation celebration dinner with his despised and disrespected parents, then set off on his journey of whackiness ... er... self-discovery. First he donated all the money his parents had given him in a trust fund to charity, destroyed his credit cards, social security card, driver's license etc, and took off on a road trip.

When he parked in a dry wash in the desert during the rainy season (another Clue) and awoke as flash flood waters inundated it, driving it into the side of an arroyo and rendering it useless for driving, he, for some inexplicable reason took out all his cash and burned it. Then he began hitchhiking, wanting to be free, to have no rules, no restraints, no responsibilities, no ties... just floating along as he willed. Who needs money? He'd just hike along and live off the land.

Except he took rides from people who did need money, and spent it on the car he was riding in and the gas that powered it. He ate their food. He slept in their houses or travel trailers. So it was kind of... inconsistent.

And a little later, after he had burned the money, he went to work on a farming combine, because... I guess he needed money. Maybe we were supposed to see how foolish he was, and that he did eventually realize that money might be needed.

He moved through various people's lives, all of whom became enamored with him for some reason, only to be left heartbroken. Most of all he crushed his parents, disappearing without a word or hint of his intent, then never calling, writing, or making any attempt to contact them. He even changed his name, and did everything he could not to be found. Meanwhile, through his sister's eyes (she narrated the film) we see the agony he brought to his parents, which she seemed to think was justified (as did he).

I got the feeling throughout the movie that I was supposed to be admiring the guy, liking him, applauding him, but I just thought he was... well, what I said. Twit. Lost soul. Blind. Arrogant. Self-absorbed. None of those lead anywhere good. In this case, he was determined to go to Alaska and find himself. Find his answers. What is life about? What is happiness? Who am I?

My husband has relatives who live in Alaska, and we've been up there as a family a couple of times. We've also read a lot about the place, particularly about those who hunt there or go out there and try to survive. So we have a frame of reference for the kinds of things you need to do there. And everything McCandless did was just stupid and naive. He walked in with a ten pound bag of rice, lived there for about three months and starved to death in the height of summer. (Or maybe he died of eating poison leaves, as the film depicts. Or moldy seeds. Or bad water. Investigators still aren't sure.) He shot a moose, but had no idea how to butcher it, had made no preparation for doing so, and worse, no preparation for smoking the meat, which was his only means of preservation at the time. So he lost the entire carcass.

The weirdest thing to me was that after all that talk and drive about getting away from society and civilization, he finds an abandoned bus out there in the middle of nowhere, with everything provided -- heat, light, warmth, a bed, shelter -- and that's where he stayed. It seemed like such a contradiction. The guy goes out to the wilderness to get away from civilization and ends up staying in the only sign of civilization for miles.

If you want to read an interesting and balanced account of this odd tale, including quotes from various Alaskans about how easily McCandless could have gotten out rather than dying, go HERE.

The movie itself is beautifully done, and shot entirely on location, so you get to see Virginia, South Dakota, Arizona, California, Alaska. It has a sound track full of songs by Eddie Vedder and it was nominated for two academy awards. Sean Penn wrote the screenplay and won a best writer award from the Broadcast Film Critics Association Awards 2008. Emile Hirsche stars as McCandless and the cast includes Marcia Gay Hardin, William Hurt, Hal Holbrook, and Vince Vaughn.

It has actually sparked a lot of thought and conversation in our house. I think what it does best of all is illustrate the foolishness of the sin of independence, which has at its base the arrogance of being so completely focused on self and self's desires, that you lose all objectivity about life. Most particularly that we are all fools, and miserable and blundering around apart from God.

It did however give me a nightmare...


At the film's end, McCandless, in a desperate search for something -- ANYTHING! -- to eat, is dining on the surrounding plants. When one of them makes him sick, he is shown discovering in his Edible plants guide the fact that he had mistaken an inedible plant for a good one and poisoned himself. The results were an inability to absorb nutrients, nausea, vomiting, paralysis and without treatment, death. Since he was trapped there, he thought, by the spring-swollen waters of a nearby river, he knew he was going to die. And eventually he did.

Right after watching the movie, I decided I didn't really like it, that it had bothered me in some way that made me think of Quigley, though I couldn't figure out what. Then, that night I dreamed that Quigley had eaten something he shouldn't eat and we all knew that he was going to die. I was very upset. In the dream. Awakened, I thought it was somewhat funny, especially since Quigley is like McCandless in more ways than just eating the wrong things...

Posted by Karen Hancock at 6:24 PM