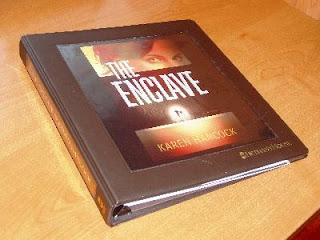 
Inside is a series of dividers designed to hold information on the BHP marketing plan, suggestions of what I can do to help promote the book, a place to store copies of whatever publicity materials they send me, a place to store records of book sales and a place for ads and reviews. It's quite nifty. I'd heard that BHP was doing this, but it's the first time I've had them send me one for one of my books. 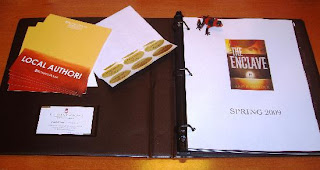 Here's a shot of the binder opened. In addition to the above materials, they have included some shelf talkers ("Local Author"), and some "autographed copy" stickers, in case I want to toddle down to the local bookstores and sign any copies they might have ordered.

There's also an article on what those Amazon Sales numbers are all about, a frequently asked questions sheet, listings of the sales and marketing teams (which is nice, since in the past I've never really had them all laid out like this) and an Author Timeline.

The latter begins "six months out" and suggests the author begin to plan appropriate website updates to promote the book, complete the "Influencer list" and begin compiling a media list.

Influencers are supposed to be people "who would be strategic advocates the book and help get the word out about it." I've never really thought about it in that way, just sending it to the people -- friends, mostly -- I think would really like/want it. Then I read the next sentence on this paper and it says "This list may include friends, pastors, ministry leaders, etc." and it occurred to me that it does! Boy does it... It's funny how people I have mostly thought of as friends I suddenly realized were also "pastors, ministry leaders, etc..." This is noteworthy to me because it's something I never set out to do, and just seemed to have happened. God's doing, really, and I find it amusing. And cool.

"Six months out" for a book that's due to release in March (though it will most likely be April now, with the deadline shift) is close to about now. Hmm. That is somewhat disconcerting, considering the fact that I'm still stuck on chapters 4 & 7...

Ah, well, I know that if there was anything I could do about that, I would. God knows it, too, and I really think He's deliberately keeping me in the dark. Letting me fail, get distracted, wander off, beat my head on the desk, etc, just so I will know that it's not me and my wonderfully executed perfect plan that got the job done, but Him. In spite of me. Very definitely in spite of me.

But today I talked out some of my current issues with one of my friends, and it was very helpful. My problems are twofold -- figure out what my protagonist is feeling and thinking (and there are multiple options/issues) and then figure out which of that (if not all) I want to portray and how. The fact that Lacey, my heroine, is supposed to be confused and torn among various motivations is what's had me going in circles for all this time. It's slowly working itself out, but... sheesh!

I remember going through this sort of thing with Abramm's scene on the balcony the morning after he slept with Shettai in Light of Eidon. When he was torn between wanting to swear allegiance to Khrell and continue on with the gladiatorial battle he was scheduled to fight -- and die in -- that same day. I fought with that one for weeks, I think, before I finally got it resolved. Now it seems just fine, but back that... whoo! Not at all fine.