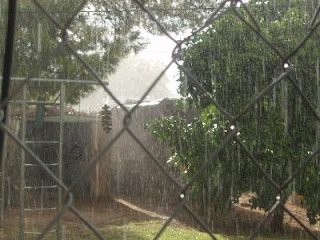 It rained over the weekend, pretty hard, and they're forecasting a return of storms, which gives me an excuse to share this photo from a couple of months ago, when the sun was shining in the west and the rain was moving in from the east. I wasn't sure the rain would actually show up, but I think it does pretty well.

The chainlink in the foreground is part of a little "atrium" we have at the backyard gate so we can have two gates into the yard, sort of a safety/containment feature for Quigley. It's worked out pretty well for us, especially with him.

Also in the picture is Adam's old gym set, and to the right, behind the grapefruit tree, our no longer used pigeon loft. Originally it was a chicken coop, then we got rid of the chickens and a few years later, started raising homing pigeons. Here's an old picture of some of them: 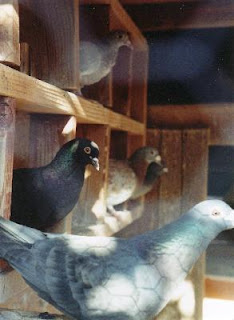 Today I took my mother for her fourth and final chemotherapy treatment, and this time everything went smoothly again. She's still having sensitivity problems with the drugs, particularly in the days following the treatments so they are giving her prednisone to counteract that. The doctor tried to get her to go for two more weeks, but since the data supporting this treatment came from studies that used four treatments he didn't have hard facts to support his advice, only a "gut feeling." She'd had enough of it all, though, tired of feeling bad, which this time was for over two weeks, and came in there ready to quit.

Next up will be radiation treatments, which seem like they'll be much less troublesome, but one never knows.