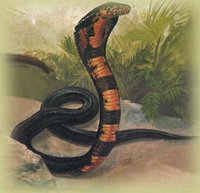 No, we don't have cobras in Arizona, but we were just doing a study on Ecclesiastes 10:8-11 which talks of taking care lest you get bit by serpents... and it got me thinking. That sometimes a series of events, words spoken, emails, and things read can combine themselves into a noxious venom that paralyzes the mind and deadens the emotions. Suddenly there is no hope. Suddenly the cloud of gloom and doom arrives. Why bother to finish this book? No one wants it anyway. Who am I kidding? It's just going to be put out as quickly as possible and fade away as quickly as it can be made to fade. Booksellers won't buy it, no one will know it exists, readers won't remember, won't care if they do...

Noxious, silly thinking, and it's weird the way it creeps up on you. You may not even feel the actual strike of the "serpent" (or serpents) in question. But later, the next day maybe, when you go into your office or to your desk and you look at the work in progress, suddenly you cannot write. You cannot bear to think of the work at all. The entire thing has transformed itself in the night, from something bright with promise to this hulking, slobbering, grunting monstrosity. Its gray, misshapen form will only going to put everyone to sleep. You see now that the whole thing is wrong, that you've been on the wrong track for 15 chapters and you must go back and redo everything. Throw it all out and start again.

Now you'll never make your deadline. All is lost. Woe and woe! And more woe.

It started Thursday sometime and swelled up on Friday. Took me all morning to think and pray and confess the tangle of sins that had somehow begun to bind me. To recall who it is I serve and that He has guided all along, that He IS helping me, that He has not forsaken me. That His plan is bigger and better than anything I can imagine and I don't know what that is! I think I know what the plan is going to look like for me, how things are going to unfold. And that's nonsense. I haven't the foggiest notion how they will unfold or even what they are. How silly, then to look at things in the world and make extrapolations of what that means God's plan is going to be next week. Next month. Next year.

Anti venom. Doctrinal anti-venom. It's amazing how it clears the mind and restores the soul.

Yes, I do need to go back to chapter 1, I think. But I don't need to throw everything out and start from scratch. I just need to do a bit of refining. Now that I have an idea where I'm going and what's important, I can do it. So that's the task for tomorrow.