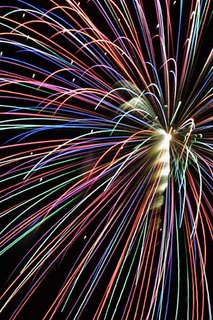 Photo by Nakae
Well, today's work schedule has been shot to pieces. For one thing, my husband is home every other Friday and we go to breakfast, so I get a later start than usual. For another, this week is spring break at the University so my son wanted to come over and do his laundry and of course that is always a fun distraction. He wasn't coming over until after noon, though, so I thought I'd get going before he got here.

Instead, just as I was getting underway my agent called. With astonishing news: Bethany House has offered me a two-book contract that includes the book I just did the proposal for (Black Box) and another, to be mutually agreed upon at a later date.

I talked to him for quite awhile. After I hung up, my husband came in and asked what the news was, good or bad, and all I could do was squeal. I was hoping they'd go for the one, but I never expected they'd want to do two! So far as I know, that was never even suggested.

Anyway, they want to market it as suspense, which of course doesn't really follow the career rules of writing in the same genre. But then I knew that when I proposed the book in the first place. And not having a lot of choice, I have to conclude it was the Lord's hand in the matter.

What happened is that back before Arena sold, and things weren't looking real hopeful, I decided to do a book that would serve as a bridge between the existing market and what I wanted to do (ie, Arena). So I started working it up, ended up writing about 9 chapters and got very interested in it. But then after Arena sold, my editor at Bethany didn't really like my idea, so I put it aside and started developing another book. That was to be the bridge between Arena and the Guardian King books. But then Guardian King sold too and now there was no need for the second bridge book. The Lord had turned my logical, bridge-book progression all topsy turvey.

I still don't know what His plan is. Black Box is superficially not like anything I've done so far, and yet, in terms of subject matter, world building, character types, and action/suspense, it is. It's just not the obvious fantasy or Sf I've done before, and, as I said, they are excited about marketing it as suspense. So am I. Suspense sells much better than fantasy! Besides, it is suspenseful and it is set in this world. But it's also got the fantasy/sf elements. They're just not as in your face as my previous books. I see this as one more part of a body of work that is going to be something unique.

Marketing gurus talk about author branding and I remember a few years back at Mt. Hermon participating in a session where we attempted to come up with taglines for each other that would serve as a start on this branding. Writing from the Edge of Imagination was the one they came up with for me, and as you can see I've made use of it -- though not as a tagline. I was never comfortable with the branding concept, though, because how can you know what your brand is going to be when you're just starting out? I have never read in only one genre. Why would I want to write in only one? But that goes against all conventional wisdom, and is one reason I gave up on all that and put it in the Lord's hands. Let Him brand me. (I rather like that metaphor, actually).

Lately I've come across others who confirm that for authors, it is our names that ultimately turn out to be our brands, for the name represents a certain type of book that may or may not conform to a particular genre. I especially like this concept because it plays to the idea that we don't know what the future holds. We don't know what the Lord has planned.

So I look at this and I think, yes it goes against marketing wisdom, and it does seem like a sort of abandonment of fantasy... but I don't think it is. Or rather, I don't think it's me abandoning something. It's just me going the direction I am supposed to go, which doesn't happen to line up with the logical, typical way to go about doing things. Nevertheless, I am certain I was supposed to write the Guardian King books, and immensely grateful God has seen fit to publish them.

I am just as certain that I am supposed to write Black Box next. For one thing, when it came time to do the proposal, I had only it and the other book I'd developed pre Arena. And NO time to work up something else. When I asked the Lord which of the two I should work on now, Black Box was the one that kept drawing my thoughts. So I went for it. And got a lot of positive responses from the people around me when I told them about it, as well as a sudden influx of research material. Even in Bible class!

And now I suppose you want to know what it is, too, right? Well, all in good time. Today I'll just tell you that I call it the cult book. It is set around Tucson, and it involves some local weirdness that occurred a few years back. Oh yes, and one more thing... the management team doesn't like the title... LOL.

For now, though, it's back to Light out of Shadow. Or whatever it's going to be called. More on that later, too.

Hooray and Praise the Lord!
Karen
Posted by Karen Hancock at 3:04 PM